Hello! happily, my personal slogo is becoming slightly less true. I can also tell you that, despite it being hastily made and crappy looking, it was still at least a semi-effective as a communication tool. I can tell because my mom saw it and then sent me a worried email. Most of the fun has been happening on the weekends.

Three weekeds ago, I helped to put on matt’s bachelor party. at the center of the plan were two things: a van, and Matt. One of our first stops was at the Statue of Liberty in New York. All of the people in the picture there were badasses that day, despite me not looking all that badass right there. 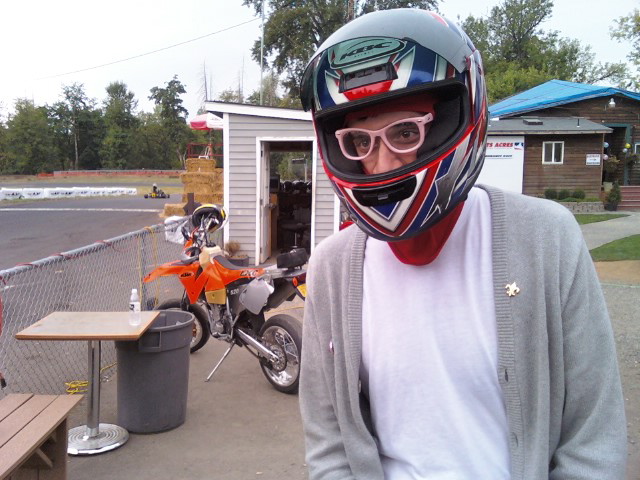 We went to the Safari Club in Estacada, Or. The place with the huge collection of taxidermied former animals that one former guy killed over his murderous lifetime. It is a strange, bizarro place. Since I’d been there a few months ago, the lights above all the taxidermied insanity had stopped working. It’s only the people that come from out of town that give a shit about the displays, the regulars are there to get hammered.

A lot of things were planned about that day. One thing we hadn’t planned was for matt to get a speech at the Safari Club from an old drunk about marriage. He had all sorts of life-wisdom. “You’d better be sure..” “I got married once but then we got divorced and I went to florida and hung out for a while with this girl with huge tits” etcetera. He seemed to come down mostly against marriage in general, but Matt was unswayed. 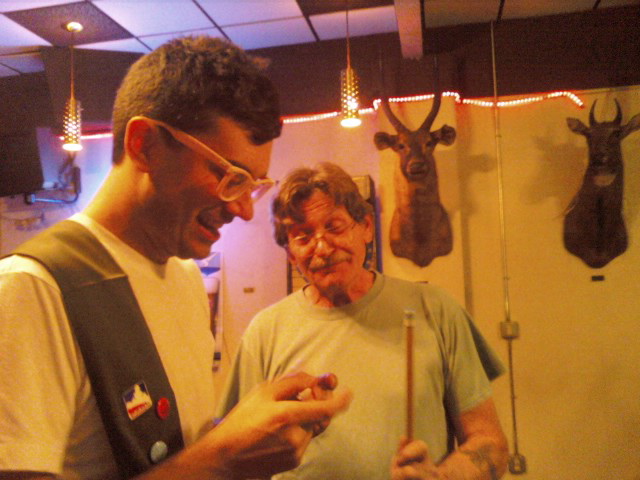 Chris and Scott had also caught up with us by this point, nice!


The back of the van. “A basement on wheels.” We are feeling good, let’s go shoot some guns and hope for the best!

At the shooting range, and the amount of fun had has begun to take its toll on matt, who seems stunned and numb. Loud noises and interactions with some serious fucking weirdos out on the gun range will revive him!

The van out at the shooting spot, looking severely badass.

Sadly, the trip permit on the van expired today. i’m going to have to figure out how to make that thing permanent-legal. And how to fix the hole in the roof. It’s raining.

Oh, look. the inside of the van during a go-kart pit-stop.

Vanning, like go-karting, is just way, way more enjoyable than I’d anticipated. stupidly, magically enjoyable, and I’m afraid i’m not done talking about it yet.

Anyways, back to showing pictures and calling the things in them badass. Here is Matt, being a badass and preparing to be a sore-shouldered badass. 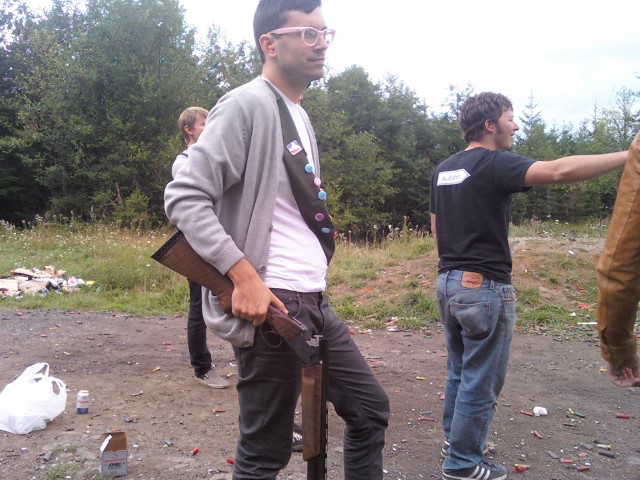 We shot stuff. We barbequed at my new house and were joined by some more dudes. We went to more bars. Here is Matt, late in the night but still not close to the end of the night really, looking very composed. How did he do it?

That’s the last picture of the bachelor party I have that makes any sense.

Also lately, besides vanning and thinking about vanning, I’ve been getting moved into my new place. that’s been ongoing, time consuming, exciting, sometimes meditative, and slow. I look forward to getting my tv there, and watching a movie on it. I also look forward to being prodocutive there.
not yet. 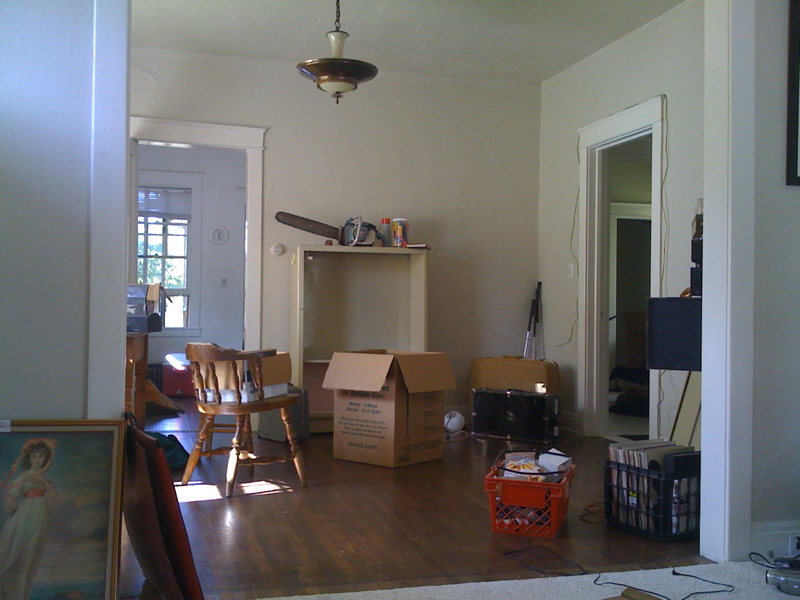 Back to talking about vanning: Colin of Blowchain was in town on Sunday, and he and Julia and I vanned out to Eastern Oregon with two goals. 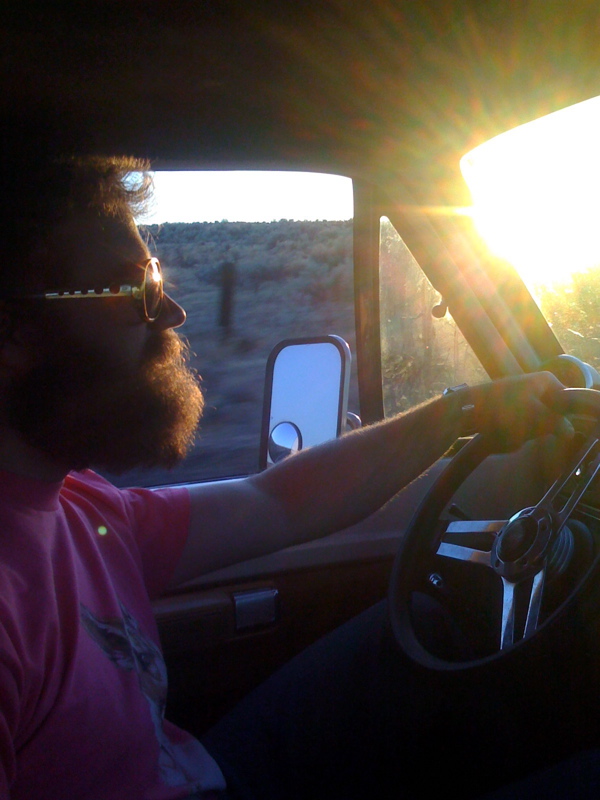 The first was to research a rumor I’d heard years ago about a dog that lived on top of a costume shop somewhere on hiway 97 between redmond and Bend. The legend was that, for money, you could put a hot dog into a bucket, then wheel the bucket up on a pulley to the dog on the roof, who would eat it. This is what the dog’s life consisted of. It sounded depressing but also one-of-a-kind. I wanted badly to know. We were given the directions “on the east side of the road,” “between Redmond and Bend,” “near an overpass I think,” and “there are crosses in the yard.” Those directions will get you there.

The rumor had been true. Sadly, the hot-dog-dog died a few years ago. the picture in the newspaper on the wall made it look like he had not led too healthy a life. so it is with a lot of celebrities, I guess. anyways, it was nice to have the rumor confirmed, even though the confirmation came with a side of tragedy. 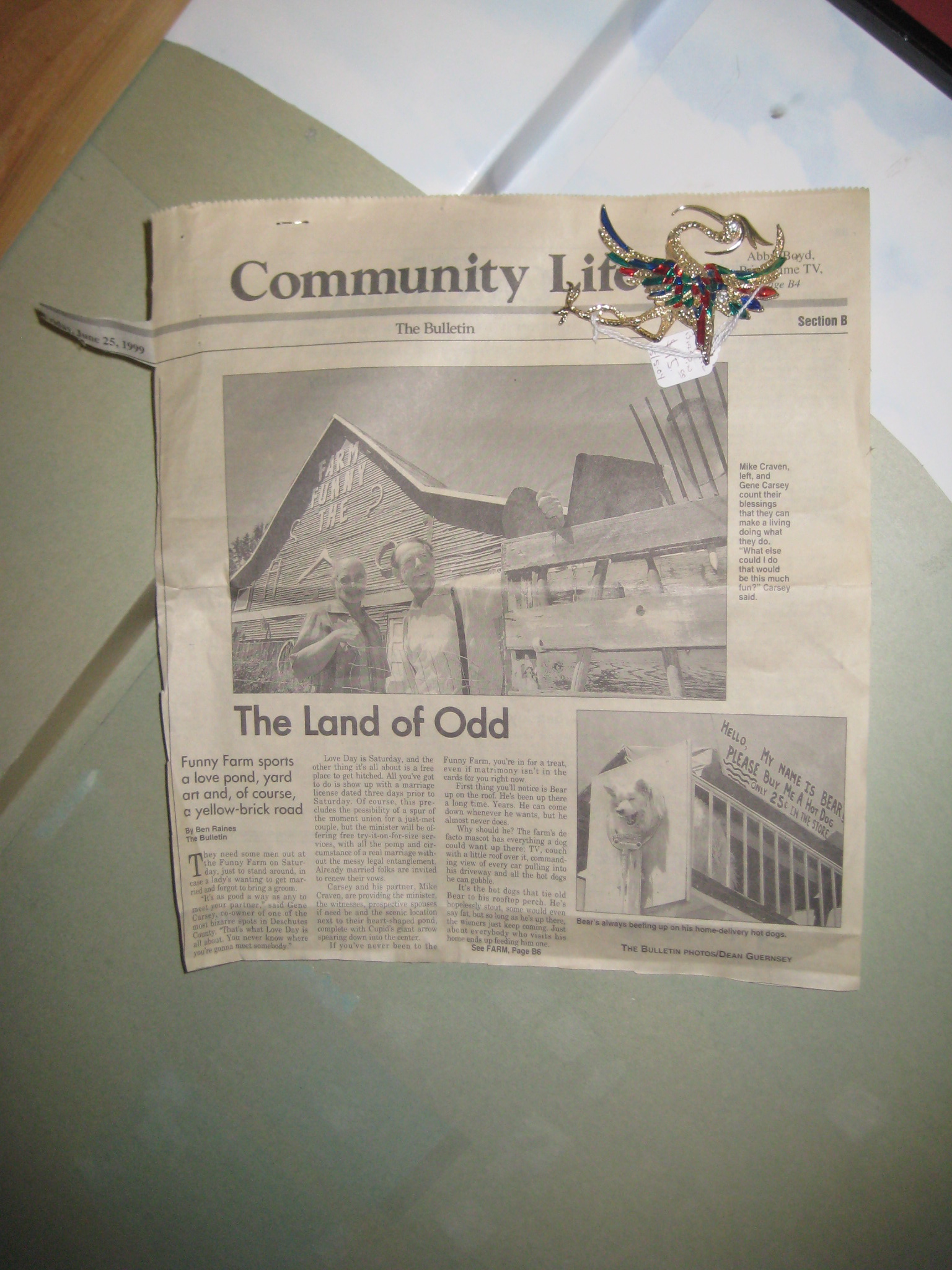 The hot-dog-dog was gone, but there was still a lot of weird shit at Fun Farm The. 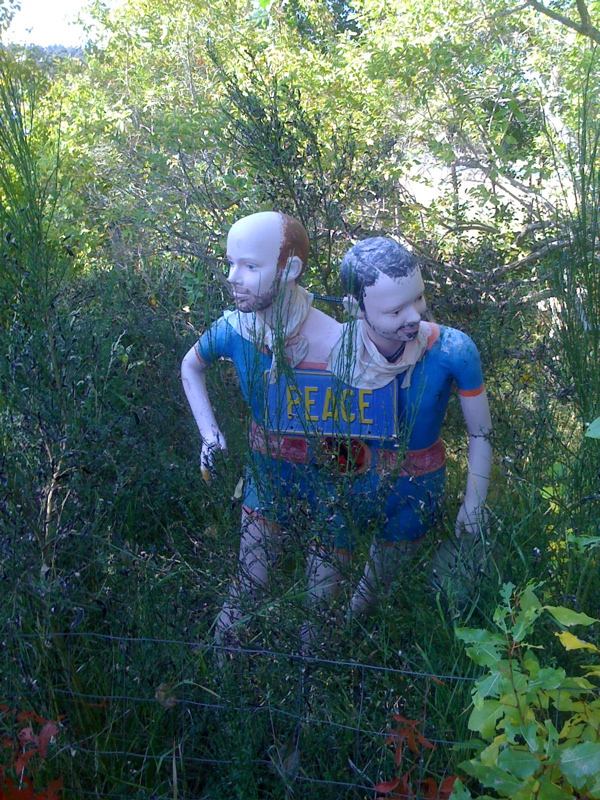 This is the bowling ball tree, part of the bowling ball garden. we saw a sign for “cat habitat” but didn’t find that. We saw chickens. We saw an antiques store/costume shop. We talked with the proprietor, who told us “not all dogs like going up on the roof.” 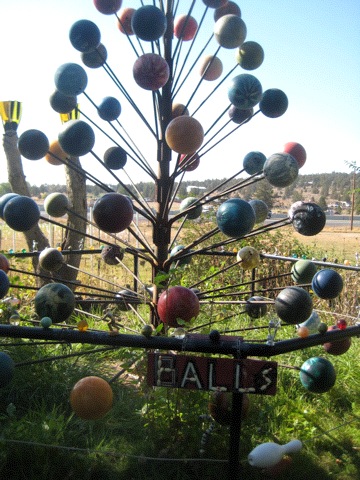 We pointed the van north now on 97, towards maupin. Glory. 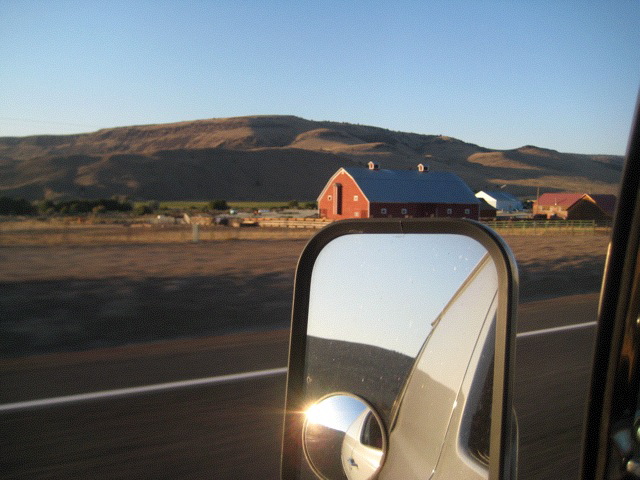 We picked up a hitchhiker because he had a sign that said “Maupin” and drove him the last 30 miles into town. He was hiking towards hood river. He didn’t rob us at all and was grateful.

We were going to maupin to inform Colin’s fantasies of moving There. as it turned out, the information destroyed the fantasies. It wasn’t a surprise that it was a small town but, basically, it was too small for him to want to move there. Here he looks at part of the town from a high-up part of town and (presumably) thinks “I don’t want to live here.”

Just to be sure, let’s check out more of the town.

It got dark fast and we had a beer in the lower part of town at a pretty cool old place. not cool enough to make someone want to move to a tiny little town, though.

A dark van home up the gorge.

And then, this most recent weekend,

Let’s get some food before we get going.

Rico quit his long time job at the hardware store. This calls for a trip to the goddamn alarm clock tree! yes! 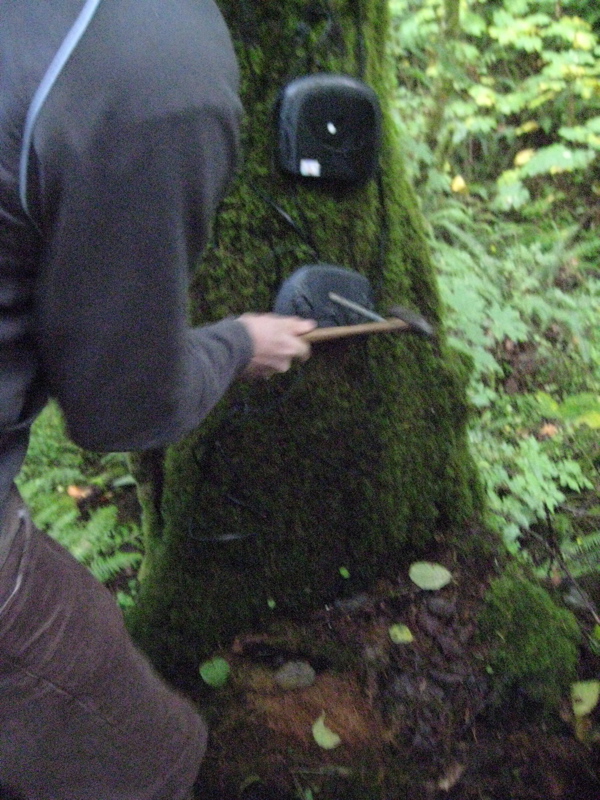 It’s a great feeling for Eric to have quit the hardware store, But I’m also going to miss visiting him there and wasting full hours at a time of his work on my projects. He always told me that the popcorn was nasty, too nasty to eat, but I also liked that. Stupidly, we didn’t drive the van to the alarm clock tree.

Seth and gina came along. once the deed was done, we hung out in the woods near the tree and shot the shit and got rained on. it smelled good in those woods the other day, man. I’m looking forward to going out again for and looking for mushrooms and shooting the shit and getting rained on. 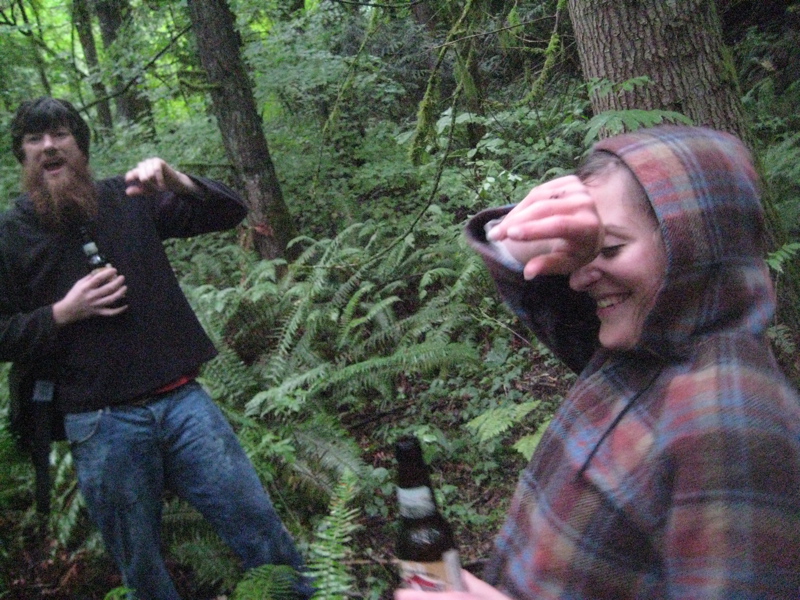 The lighthouse is a bar in Linnton that is awesome, and we stopped there and shot the shit. But it was getting late, and Eric had some sausages waiting, so we headed back. 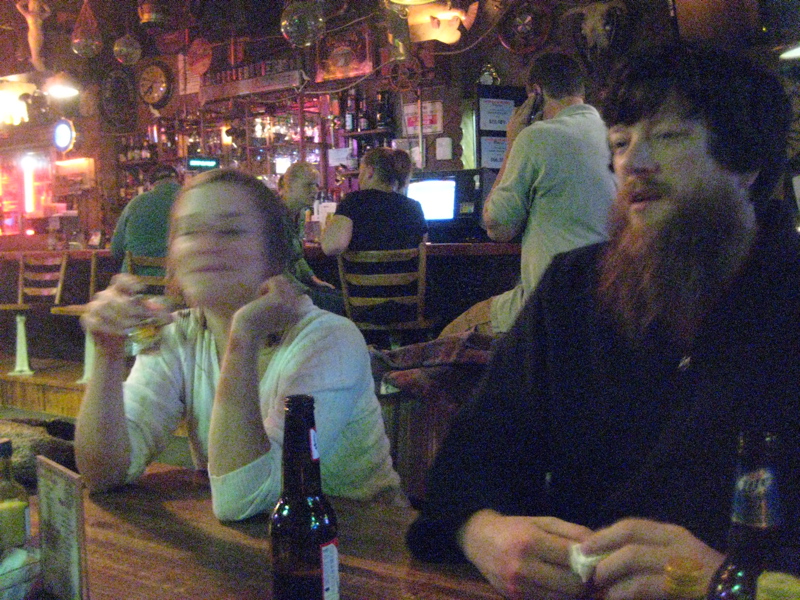 And then, this most recent weekend,

Fall arrived hard this weekend. When I took this picture there was the sound of tires on wet street and it fellt a lot like fall. That’s why I took it, but I don’t know if that fall-like feeling is actually conveyed by this shot at all. What’re you going to do. 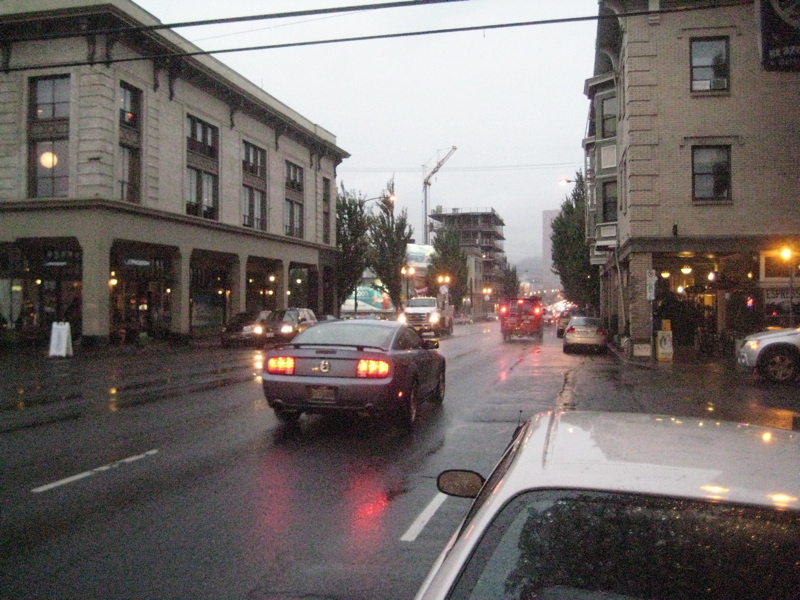 On sunday matt and genevieve had their pictures taken a lot. wedding dong! the theme of the wedding was “yay!” Not officially, but it could’ve been. 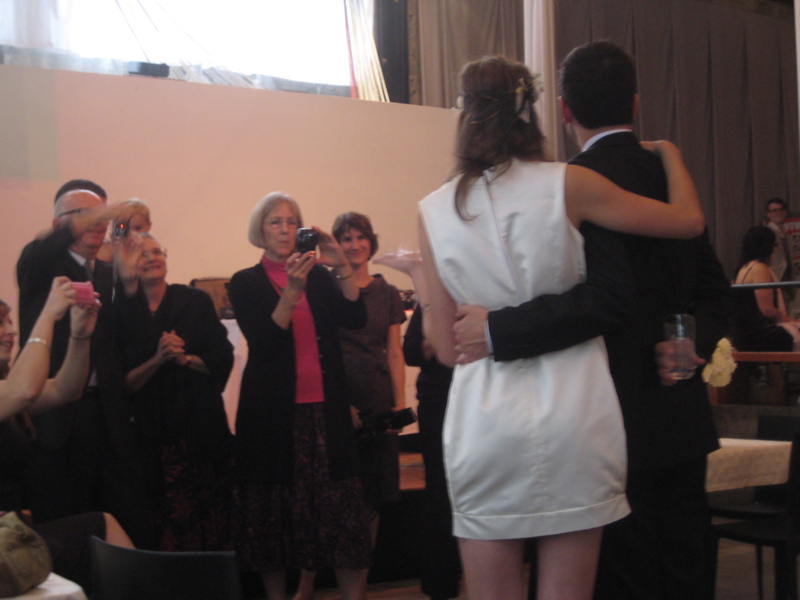 Look at this picture patrick took at the t:ba Mega*Church show. WOW

was this boring? how boring?